A SHAKEN 17-year-old truck driver has miraculously walked away with minor injuries after his truck rolled down a steep embankment on Tin Can Bay Rd at Goomboorian on Wednesday morning.

Narrowly missing a tree and leaving the road just as he passed an oncoming Pajero, onlookers and authorities on the scene agreed the teen driver was lucky to be alive.

"I thought he'd be dead," Pajero driver Allan Smith told The Gympie Times, still shaking his head at the large truck on its side down the six metre drop.

Mr Smith had been driving towards Gympie at about 10am when the oncoming truck started to veer off the side of the road just before Anderleigh Rd.

He thought it was going to right itself, but seconds later saw the truck disappear over the drop in his rear-view mirror.

"All I could see was a massive cloud of dust and the noise was insane, it was so loud. I saw the whole back of the truck get destroyed," he told The Gympie Times at the scene, still shaking off goosebumps.

Mr Smith said he couldn't believe how lucky the young provisional driver was considering the size and weight of the truck and the limited protection from the windscreen and dash coupled with how close his landing was to a tree.

He also couldn't help but shudder at the thought of the truck veering into the direction of himself and his wife and dog who were just coming into town to get things organised for relocation to the area.

He thought he should buy himself a lottery ticket, but said the truck driver "better buy himself several."

The young driver was transported to Gympie Hospital for observation due to the height of the fall, with suspected minor shoulder injuries.

Tin Can Bay Rd was closed in both directions while the truck was pulled from the ditch with two tow trucks.

Gympie police, ambulance and fire and rescue officers were on the scene. 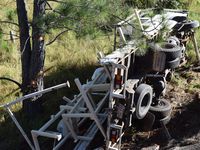 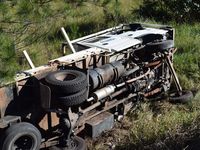 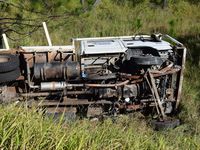 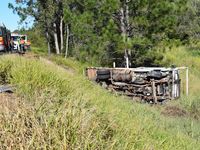 Weather The Bureau of Meteorology issued a warning for damaging winds, large hail stones, and heavy rainfall for parts of the Western Downs.

News FULL LIST: From pig races to market stalls, here’s where you and the family can celebrate Australia Day in the Chinchilla and Miles District:

News Applications have opened for Maranoa community organisation to access vital funding provided by the Federal Government. Here’s how you can apply:

Woman ‘seduces’ stepson, has his baby

‘I’d get out of bed for $5’: Inside story of Candyman's rise

News Dalby residents are being urged to donate unwanted Christmas gifts to Vinnies to help change the lives of those in need.

Qld’s anti-vaxxer hotspots to be targeted in jab campaign

Free help: Businesses looking to up their game in 2021

News A new and exciting, family fun event will be kicking off in Chinchilla this...