CARS under branches, a popular hotel's near miss, a racecourse tragedy and a See Park giant struck by lightning; one Grafton suburb in particular felt the full wrath of the wild storm which hit the city late on Thursday afternoon. 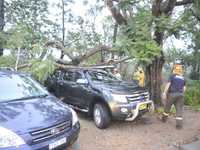 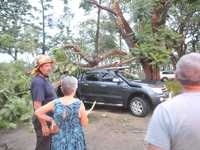 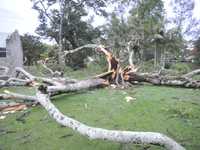 Westlawn was in the direct path of the super cell, which developed rapidly as it approached the city before it swept through the city at 5.30pm without any official warning, bringing with it damaging winds and torrential rain.

Dozens of large trees were snapped at the trunk or completely uprooted from the very strong wind gusts with damage concentrated in the area between Clarence River Jockey Club and See Park.

Emergency services and Essential Energy crews worked into the evening to clear streets from fallen trees and debris, attend damaged properties and, for one unlucky couple, remove branches which had fallen onto their vehicle while they were dining at the Village Green Hotel.

The pub itself - and its patrons - had a lucky escape, with a large Jacaranda tree coming to grief directly outside its main entrance.

Meanwhile, several onlookers and local residents reported a racehorse had beenÂ killed when large branches fell onto one of the stablesÂ adjacent to Grafton racecourse.

Many of the city's iconic jacaranda trees are located in the area most impacted by the storm, including along Jacaranda Avenue and in See Park, where the trees suffered significant damage.

One giant tree in the middle of See Park adjacent to the playground was completely blown apart by a lightning strike.

The neighbourhoods between See Park and the Grafton CBD also suffered extensive damage from the storm. 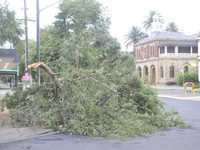 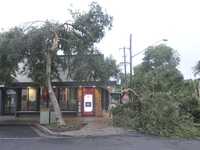 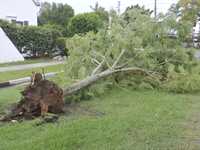 Click here for more coverage on the Grafton storm and all the latest weather coverage for Clarence Valley.

Crime Dalby police will allege a man was heavily intoxicated when he drove his car into a popular shop front along Drayton Street.

Crime The man pleaded guilty before the Toowoomba District Court to 22 counts of supplying a dangerous drug.

Property A bidding war between two prospective buyers resulted in more than 300 hectares of prime agricultural land near Dalby selling for an eye watering amount.

EXPLAINED: Everything you can do now restrictions have eased

Health Tear off that mask and put your dancing shoes on â€“ the stateâ€™s COVID-19 restrictions have officially eased. Hereâ€™s what you need to know.

Statewide audit after fears nurses let down by masks

Crime Police have charged a man with multiple offences after he crashed his car near...