Another life lost: Officer 'sick of the fatal crashes'

Another life lost: Officer 'sick of the fatal crashes'

"I'M BLOODY fed up to the back teeth."

With decades of experience with the police, Sgt Webb would rather have spent Saturday with his family and friends.

Instead the veteran police officer was standing at the scene of yet another grim road fatality. Another life lost needlessly.

As he and his team combed the scene to shed some light on the day's traumatic events he took a moment to speak to the media and did not pull any punches.

"I've got better things to do with my time than to be standing here in the middle of the highway dealing with these things," he said.

"The police can only do so much.

"People need to do something to save themselves."

At 8.30am, a ute and Commodore sedan collided about 45km north of Gin Gin.

Sgt Webb said initial investigations showed the driver of the sedan, heading northbound, had veered into the path of the ute.

The driver of the sedan was killed instantly. 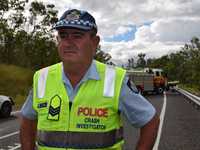 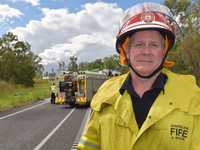 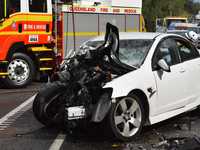 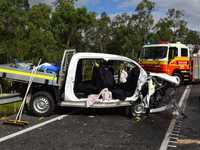 The driver of the ute was taken to Sunshine Coast University Hospital with severe leg injuries.

"I'm not sure why the northbound driver veered on to the wrong side of the road," Sgt Webb said.

He said the Bruce Hwy was closed for a long period of time with wreckage blocking both lanes.

"I know people have been complaining about the time it's taken," Sgt Webb said. "But unfortunately we have a job to do."

QFES Bundaberg Inspector Ronald Higgins, who led two crews from Gin Gin and Bundaberg, said it was a tough scene to attend.

He said damage to both vehicles was significant as the vehicles collided at high speeds.

"We are overawed at times responding to this type of things," he said.

Sgt Webb urged drivers to observe the Fatal Five: distraction and inattention, speeding, drink and drug driving, failure to wear a seatbelt and driving while fatigued.

"I will never say any road is dangerous," he said. "I've driven this road many times over 30 years. It is safe as long as you stick to the rules."

Education School fees at most Queensland private schools have increased despite the financial impacts of COVID-19. SEE THE LIST

News A weekend trip to the Bunya Mountains almost proved deadly for a woman after she was bitten by a snake in the popular tourist park.

News After recent revelations of deaths in aged care facilities, the shocking rate of abuse in Queensland homes has been laid bare.

ON YOUR BIKE: Man disqualified from driving for two years

Crime A Dalby man took the chance to drive even though he had been suspended, and was intercepted by police in possession of a meth pipe.

News “These things have to move more quickly that they have done.”

‘WE LOST EVERYTHING’: Charleville mum of six's heartbreak

News “We’ve basically just got to start from scratch.''

Crime Investigations are continuing into an alleged street brawl between two men that...