FIRE UPDATE: Hundreds of thousands of dollars damage to mill

FIRE UPDATE: Hundreds of thousands of dollars damage to mill

Emma Reid Editorial Assistant I have worked with the NewsMail since January 2012. I started out as the secretary before discovering a passion for sharing people's stories. I took on the role of a reporter in 2014 and haven't looked back. I enjoy meeting new people and hearing about all walks of life. If you'd like to share your story, give me a buzz or shoot me an email.
Full Profile 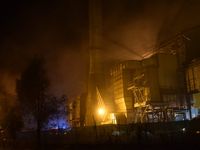 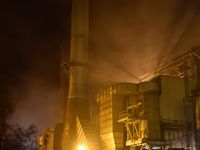 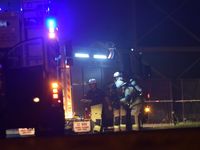 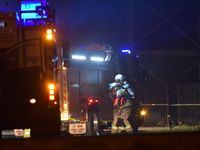 UPDATE 2PM: Bundaberg Sugar is investigating the cause of a fire at Millaquin Mill last night.

A fire fighter sustained a minor injury and no other injuries occurred.

"This is an unfortunate set of circumstances with the mill scheduled to commence crushing for the 2016 season on Monday, June 13.

"Damage to the bagasse conveyor system will prevent the crushing mill from operating.

"From an early assessment, the fire damage may delay the start of crushing at Millaquin for up to two weeks.

"However we will continue to keep people informed."

Mr Pickering said plans are already in place to commence repairs following an inspection of the site by an insurance assessor.

"We are still going through the assessment process but at this early stage damages are estimated to be in the range of hundreds of thousands of dollars," he said.

"Spare replacement equipment is already stored on site so this will allow us to commence work immediately on the damaged conveyor."

Mr Pickering praised the efforts of the Queensland Fire Service and the mill's emergency response team in getting the fire under control.

"Fortunately there was no switchboard damage and the fire didn't extend to the bagasse silo," he said.

UPDATE 8AM: TWENTY eight Bundaberg firefighters have saved the Millaquin Sugar Mill from what could have been a major fire overnight.

Bundaberg Station Officer Trevor Duncan said the fear was the blaze could have spread into a nearby bagasse storage area and been very hard to control.

Firefighters were called to the mill in East Bundaberg at about 9 last night to find a fire on conveyor belts that led to the bagasse hoppers.

He said firefighters fought the fire, which was in an elevated steel construction, for about three hours.

One was on the conveyor belts and the second was at the base of a new hopper bin area where the bagasse gets stored.

"The fear was the fire was going to get into that bin and ignite the substance inside the hopper," Mr Duncan said.

"They have done an excellent job tonight.

"We have had a total of 28 firefighters on site tonight and 14 firefighters rotate through wearing breathing aparatus.

"So it was one job seperated in to two."

No staff from the mill where injured during the fire although one firefighter did sustain and minor injury to his knee while fighting the fire from an elevated position.

Mr Duncan said the extent of damage will be assessed and the cause of the fire investigated.

The mill will have been preparing for first crush, which is expected to begin Monday. This comes just days after heavy rain and winds flattened large areas of crops in the region.

Millaquin Mill is located on the bank of the Burnett River.

It is one of two sugar mills - the other being Bingera - which have a daily crushing capacity of 15,000 tonnes of cane.

The mill was built in 1882 and in 2010 underwent a $40 million upgrade, which included the installation of a new vacuum pan and a cane juice tank.

UPDATE 11PM: Bundaberg Fire and Recue officers have put out the fire in the bagasse bin at the Millaquin sugar mill.

Firefighters are currently removing burnt conveyor belts that led to the bin while four officers in breathing apparatus dampen down the area.

The mill will remain on fire watch until firefighters are confident there is no risk of re-ignition.

UPDATE 10.20: A firefighter battling the blaze at the mill has been injured and is being assessed by ambulance officers.

It is believed the officer was fighting the fire from an elevated position when he injured his knee.

He was taken to the ground to be treated by paramedics.

UPDATE 9.45: TWO fire crews are battling to put out a blaze at Millaquin Mill, Bundaberg, East, which ignited just before 9pm.

The fire started in a conveyer belt leading to bagasse bin at the mill, sparking a heavy smoke plume over the area.

A Bundaberg Police spokesman said the fire was in a very hard position to put out due to dust and leftover cane from last season.

Firemen are currently in an elevated position trying to put out the flames.

The spokesman said it was unclear how the fire started but there were no suspicious circumstances.

Ambulance and police are both on the scene.

It was unknown if anyone had to be treated for smoke inhalation.

The mill will have been preparing for first crush, which is expected to begin Monday.

This comes just days after heavy rain and winds flattened large areas of crops in the region.

Millaquin Mill is located on the bank of the Burnett River.

It is one of two sugar mills - the other being Bingera - which have a daily crushing capacity of 15,000 tonnes of cane.

The mill was built in 1882 and in 2010 underwent a $40 million upgrade, which included the installation of a new vacuum pan and a cane juice tank.

BREAKING: The Millaquin Mill at Bundaberg East is on fire.

The fire is believe to have started at the back of the mill in a silo.

Wind is blowing smoke north east across the river.

There are multiple emergency crews are on scene.

Including four fire crews and more on the way. 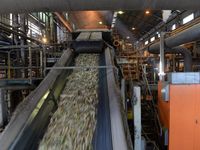 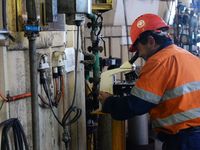 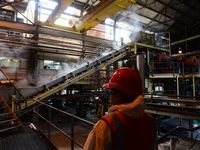 Crime A popular social media user who boasts more than 280,000 followers on TikTok was arrested for failing to leave a Dalby pub and swearing at police.

News Warrego MP Ann Leahy has slammed the Premier’s proposal to move international quarantines to remote worker camps, labelling it as a ‘thought bubble’ and ‘crazy...

News Tens of millions of dollars of funding have been secured for road safety upgrades in the Maranoa electorate. Here are the details:

Where Brisbane residents can now travel

Teen with 149 siblings reveals life in a cult

Council News A new service station in Chinchilla may not go ahead as it failed to meet multiple council requirements. Here’s what was planned for the facility, including laundry...

ULTIMATE GUIDE: Where to celebrate Australia Day in Dalby

Community From family cricket games, to citizenship ceremonies and barbecues, here’s where...

Drink driver was in his underwear after catastrophic...

Crime A young man who drunkenly rolled his car several times along the Warrego Hwy...

Western Downs farmers could lose up to 40% of crops due to...

Rural The worst hit areas in the Western Downs have been revealed as potentially millions...