THEY call it the African massage.

Sharp jolt to the left, with a less-than-graceful smack into the overland truck window.

Then a body roll to the right as the torso tries to right itself in some beginner belly dancing move.

It is more often than not accompanied by a vertical push-up on the seat in front before the back nestles into the seat it originally rested on.

Travelling on East African roads is rough and tiresome, with 100km journeys also taking twice the time a highway trip would take back home.

And the oppressive poverty, evident in the thousands of purposeless individuals passing the hours with little more than social chitchat outside their dilapidated shacks, can be devastating to view. But the smiling faces and waving hands every few metres through the roadside villages, and even in rural areas, bring sheer joy to a journey lacking in comfort.

"How are you? How are you?" the kids shout as we drive past in a bus-like truck.

The younger ones might say hi or bye or simply wave as their white teeth gleam from their unblemished skin.

Some just stare, eyes following the truck, as though they have never seen a mzungu (white person) before.

The sheer glee for most of them when we wave back and say jambo or agandi is worth every wave.

Even the adults seem to enjoy a wave or a thumbs up.

Sadly, too many little ones have been taught three heart-breaking words: "give me money".

But we are taught not to hand over money, because it encourages begging, or lollies, also requested with depressing frequency, because there is no dental care.

Despite the decaying roads and the basic shelters, the people take pride in their appearance.

Men, wearing suits and leather shoes, and women, in suits and high heels, traverse the well-worn, potholed road verges as a westerner would a flat, concreted footpath.

The red mud caking on their beautiful shoes doesn't seem to bother them; it is the daily commute.

In fact, nearly everyone seems to walk everywhere. 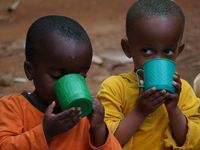 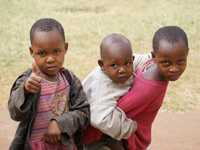 There are people lining the roads like an ant trail throughout most of East Africa, but particularly in the cities.

The other popular transport options in the cities are the overcrowded City Hoppas, tiny mini-buses chock-full of commuters, and motorcycles, with up to five people precariously balanced, and they are hard to miss.

The skill with which people in the rural areas manoeuvre bicycles stacked with bags of rice, potatoes or maize, or bunches of bananas, is impressive by any standard.

But seeing them balance timber beds, mattresses and logs is truly a sight to behold.

For a continent most often in the news because of conflict, violence, health issues or negative cultural practices, it was pleasing to never feel unsafe or unwelcome.

Sure, heckling from roadside traders and being followed down the street by people trying to sell their wares can be overwhelming.

But when you realise that buying just one item could feed their family for a month, you can understand their persistence.

East Africa might be working on the road infrastructure to make traversing their great land easier - without the infamous massage - but already they have embraced the tourists travelling them.

News A Dalby State Emergency Service group leader has been recognised for her tireless efforts to empower women in a primarily male dominated organisation.

Property More than 600 acres of prime agricultural land in the Western Downs will go under the hammer at an exclusive online auction. ALL THE DETAILS HERE!

GOLD RUSH: Major industry player commits to mine near Casino

Blow it up: Queensland LNP is fully in crisis

Search now: Are you one of 160k Qlders owed money?

News Nearly $200 million of unclaimed money is sitting with Queensland’s Public Trustee. Search now to see if you’re owed any.

News Emergency services rushed to reports a vehicle had collided into several parked...