by Wayne Heming and Meredith Papavasiliou and Shakira Sellen

More than 2000 fans, most decked out in Cowboys gear and waving flags and banners, lined the airport walkways three and four deep, screaming and even crying as their heroes arrived home with the grand final spoils.

When Thurston, carrying the Provan/Summons trophy and wearing dark glasses after suffering an eye injury in the gripping 17-16 win, emerged, the big crowd which had been waiting for hours, went wild.

The noise became even more deafening as more and more members of the victorious Cowboys side came into view.

Teammates put Thurston (pictured) on their shoulders as they made their way through the thick crowd, signing autographs and posing for photos with their adoring fans.

The players were expected to be welcomed home as 2015 NRL champions by a crowd of up to 20,000 fans at 1300Smiles Stadium as part of their grand final celebrations.

"They (fans) have waited so long for this. It could be like this for weeks," beaming back-rower Gavin Cooper said yesterday.

Like most of his victorious teammates, Cowboys fullback Lachlan Coote couldn't get the smile off his face.

"This gives you goose bumps," Coote said. "I've got chills running up and down my spine, it's an unreal feeling."

MORE than 1,000 fans have welcomed the North Queensland Cowboys as they arrived at Townsville Airport this afternoon.

They team are now at 1300SMILES Stadium in Townsville for their civic reception.

It's thought about 10,000 fans have turned out for this afternoon's event.

THE Cowboys' arrival has been delayed by 22 minutes.

Cowboys CEO Greg Tonner just arrived at the airport ahead of the rest of the team.

He was grinning from ear to ear and was thrilled to see the crowd.

"Look at this crowd," he said.

"What a great turn out."

Mr Tonner said it was wonderful to see so many people welcome the Cowboys home.

Fans are gathering to see their team arrive at the Townsville Airport.

They are expected to arrive to an eager and large crowd about 1.30pm.

Their return comes after their outstanding win against the Brisbane Broncos in the NRL Grand Final last night.

A civic reception will then be held at at their home stadium later. 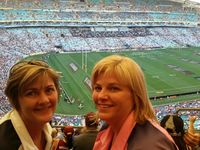 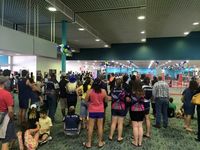 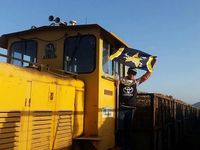 Daily Mercury editor Meredith Papas is at the welcoming ceremony at the International end of the airport.

"It's incredible, there's so much jubilation and joy, everyone's just so happy," she said.

"It's North Queensland at its best.

"I've never seen so much yellow, grey, blue and white in my life."

Banners and posters can be seen throughout the enormous crowd.

"There's even a percussion band here," she said.

News Member for Warrego Ann Leahy is urging landowners to carefully review their valuation notice and consider if they should lodge an objection against their new valuation...

Weather Most places in southeast Queensland have recorded their coldest morning of the year as a wintry blast caused temperatures to plummet overnight.

Jab now a sore point for a PM under fire

Health The Prime Minister has been forced to defend the slow vax rollout and to explain how he received the Pfizer jab at a private clinic which only offers AstraZeneca to the...

Blame game over $5.85b roadworks backlog

News The cost of required works on Queensland’s state controlled roads has climbed by more than $400m in just one year.

When Aussies may travel overseas again

Small powerhouse inspired by Britain but driven by China

Economic recovery has legs: How Cairns plans to fight back

Ben Roberts-Smith hits back at claims

Local Faces Families gathered at the Chinchilla Museum for a fun family day out, enjoying a picnic, sausage sizzle, and Mini Train adventures on Sunday, April 11.

News Rest areas across the Western Downs and Darling Downs will be upgraded to help with...

Art event, first of its kind to hit Western Downs

Council News Western Downs creatives are being urged to get involved with an event which will...

Crime A young woman and alleged drug trafficker asked a Chinchilla judge to remove her...