CQ teenagers go on joyride that ends in southwest Queensland

CQ teenagers go on joyride that ends in southwest Queensland

A TEENAGER is on the run and three others have been arrested after an alleged 12 hour dangerous joy ride that began in Rockhampton and ended west of Chinchilla.

Police have alleged the group stole a vehicle from Denning St in Park Ave, Rockhampton about 1.45am on Saturday morning.

The teens were able to evade police twice on the Carnarvon Highway, north of Roma, the first time at about 10.50am with a tyre deflation device.

This sparked a chase that had to be terminated due to "excessive high speeds".

A police car was damaged when the alleged stolen vehicle performed a u-turn in front of it around 12.30pm on the Leichhardt Highway.

Police said no-one was injured as a result of the crash.

The stolen vehicle travelled along the Leichhardt Highway before entering the Warrego Highway, then headed towards Chinchilla.

The vehicle came to a stop and the four teenagers fled on foot about 1.15pm.

The fourth teen, the alleged driver of the vehicle, remains outstanding.

All three have been charged with unlawful use of a motor vehicle and obstruct police.

The teenagers are all from the Rockhampton area. 'HELPLESS': How women in fight for safety let down

Crime Four domestic violence orders are breached every hour in Queensland, which advocates say has left victims feeling “helpless in terms of their own safety”.

Description released for man who held up highway servo

Male violence is an endemic problem

Smartphone obsession can turn deadly even on foot

Serious injuries: Man hit by car on Hwy to be airlifted 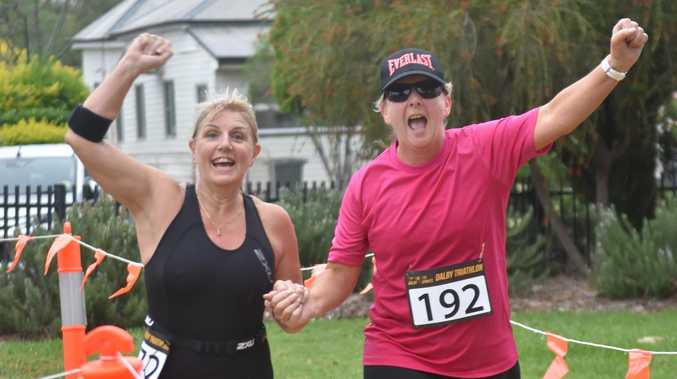 Crime This is how family massacres impact our nation, writes SHERELE MOODY

News The driver was washed downstream in the cab of the truck.

News A driver on a suspended licence got back behind the wheel too early, and has ended...