Megan Masters Reporter Megan joined APN in 2009 after getting a start as a Rural Press cadet reporter at the Wellington Times in central western New South Wales. She started at The Chronicle first as Saturday reporter, then as weekly staff reporter before taking the reins of the local community paper, Toowoomba Life.
Full Profile
0

IT WAS a tough slog for auctioneer Kim Taylor as he faced a reserved crowd in the backyard of a prime Arthur St property.

It was a case of all's well that ends well though, with former owner Mark Magnusson and property agent Alex Lincoln both walking away smiling after the hammer came down at $1,302 500.

The 32 Arthur St property was listed earlier in the year with an asking price of $1.59million, but it was obviously a buyer's market and the bids were slow to come through.

Six buyers registered early and another joined later in the auction, but a sizeable crowd turned out to watch the action and gauge the market.

The final $40,000 in the price tag took 20 minutes to achieve, with bidders going up in $2500 increments on the luxury property.

An hour after bidding was opened, the hammer finally came down.

Mr Magnusson said he had already moved into his new home and was pleased to farewell the stunning mansion.

"We've been building for the last two years and we moved in two months ago, so we don't need it anymore," Mr Magnusson said.

"We're absolutely happy with the result."

Mrs Lincoln said she would head home feeling satisfied with the sale of the beautiful East Toowoomba gem. 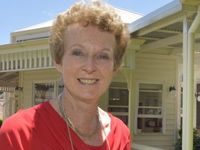 How drinks on Clive Palmer’s yacht as LNP sank sparked a...

World unites in pushback against China

News The two men who have been charged with allegedly robbing a Warrego Highway servo have appeared in court.

Crime NAMED: A man who hung out of his car swearing at drivers faced Chinchilla court for...

Boxing Retired Australian champion boxer ‘Clemo’ stepped back into the ring and dominated...