SAUSAGEGATE: 'One bite would have been polite'

SAUSAGEGATE: 'One bite would have been polite'

THE reporter who organised a sausage sandwich for Prime Minister Malcolm Turnbull says the PM should have taken a bite.

"I asked Kay to hand it to him because I wanted to see if he would take a bite," Northern Star's Alison Paterson said.

"After all, this food was being given out to people who had suffered in the flood.

"One bite would have been polite.

"As a pollie, he's no doubt had to stomach more unpalatable ideas and decisions."

Why the hell would Malcolm Turnbull turn down a sausage sandwich in flood-ravaged Lismore??? #auspol #pmlive #theboltreport #outsiders pic.twitter.com/Sisx9HKwGE

SOCIAL media has reacted to Prime Minister Malcolm Turnbull's visit to flood-devastated towns with a stream of memes poking fun at his decline of a sausage sandwich.

"That's very kind of you, but I think I'm running around a bit much to be eating that,' Mr Turnbull told the Lismore Baptist Church volunteer.

The PM's walk through Lismore CBD on Monday left some home and business owners upset because the media opportunity didn't come with immediate announcements of emergency funds.

Interest free loans were announced instead.

Those who have lost their income due to the flood can apply for a regular cash Disaster Recovery Allowance for up to 13 weeks.

Couples over 21 can get up to $483 a fortnight each, while a single person with a child can get $579 and without a child $535, with some assistance for those aged between 16 and 21 also available.

Prime Minister turns down Sausage Sandwich... now we have seen everything pic.twitter.com/JFSMTMpRkD

"I announced the first assistance package last Friday, but when the extent of the damage became clear I told the Prime Minister more help was needed," Mr Hogan said.

"After he come to our community to inspect the damage first-hand on Monday, he agreed to fast-track it.

"This further cash help is something our community desperately needs and will help us to get back on our feet." 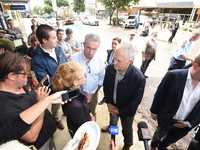 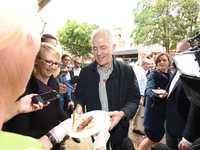 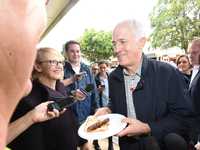 Elsewhere, here's how the internet reacted during the flood:

1. Watch out for the Crocs!

3. The "'fake office for smashing in a film clip" by Reuben Barkley.

4. The 'local pharmacist swims to work', according to Vicki Thrower

Outfits suggested by Rob Sheather, during the floods.

6. The flood was bad, but not so bad Queensland turned into Tassie.

Although blending the two might be pretty bad in some ways.

8. The practical transport suggestion during floods, by Steve Bell.

Property A cattle property that has been in the hands of a Western Downs family for over 100 years is set to go under the hammer this March.

CHILD GROOMING: Little girl found in the back of Dalby man’s...

Crime A Dalby man was convicted of grooming a young girl with the intent ‘to engage in a sexual act.’ FULL REPORT:

Crime A magistrate reprimanded a Dalby mother of eight for a ‘disturbing’ incident at what she believed was ‘one of the best McDonald’s in the state’. DETAILS OF THE...

Council News A new strategy has been launched by council to draw visitors to the Western Downs after seeing a welcome spike in tourism during the pandemic.

Is Porter playing victim or casualty of imperfect system?

Tasmania to get answer on AFL team next week

News Fifty families who entrusted the care of their most vulnerable family members to two Western Downs nursing homes wait with bated breath to hear whether the aged care...

GROW UP DION: Man runs from police during drunken encounter

Crime A man found himself running away from police through the streets of Dalby after...