GALLERY: All photos from Dalby Devils’ first game after hiatus

GALLERY: All photos from Dalby Devils’ first game after hiatus

RUGBY LEAGUE: The new normal for the Dalby Devils looks a little like this: hand sanitiser as you enter the field, and a sign-in through an app on any smart phone.

It looks like social distancing between spectators, and thorough cleaning of any and all surfaces surrounding the field.

But the passion of the players and the love of their game remains consistent with seasons prior.

The Dalby Devils took to their home field for the first game back after the pandemic put the brakes on the game for the year.

Toowoomba Junior Rugby League president Dan Aldons said it was somewhat of an impatient wait to get the players back on the field.

“It’s great to get the football back,” he said.

“I know the kids have been busting to get back out there.

“It’s been a long road to get us here but it’s just good to be able to give them some football this year.”

Despite a change in circumstances, and a new eight-week season, Aldons said TJRL’s goals remained the same: to get players on the field and deliver the community the sport they love.

“This is all new territory for us,” he said.

“With these eight weeks we’re just going to try and get back to normality, get some footy played.

“Hopefully things will ease up next season and in the summer months, and we can get back to normal next year but if not we’ll get a bit of practice under new conditions and get used to that.”

The under-13, under-14, and under-15 Devils took on Pittsworth, and the under-16s played Collegians.

Check out all the photos from what was a great day of footy: 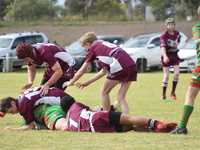 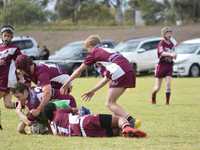 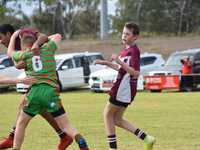 Politics More than 100,000 Queenslanders have already cast their vote, in an unprecedented turn out on day one of early voting.

Crime More than 90 per cent of people hit with hefty covid fines have failed to pay them, with the State Government waiting on millions in unpaid debts.

Politics The issue of euthanasia has become a hot topic ahead of the state election. Find out where the candidates on your electorate stand on the subject.

News A GAS worker who drove drunk with a protein bucket filled with vials, and used needles, placed himself in hot water at the Chinchilla Magistrates Court.

Letters: Euthanasia is a licence to kill

Patient dies after untrained ‘wardie’ had to do CPR

Palmer’s millions: Can he swing ballot?

Crime A MAN was allegedly nearly three times the limit when he was driving on the wrong side of the road, and crashed head on with a car carrying a horse trailer. DETAILS:...

Million-dollar farming opportunity up for sale in the Western...

News A WESTERN Downs property ideal for local farmers looking to expand is on the market...

AMAZING DEAL: Read it all for $3 a week for first 12 weeks

Crime HEAVILY drunk drivers and weapons were uncovered during a busy weekend for Dalby...