UPDATED, 1pm: The Pacific Highway has been re-opened. 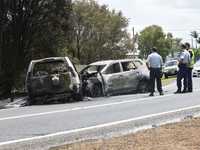 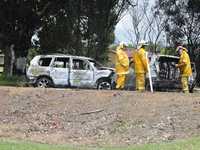 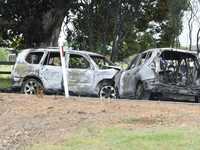 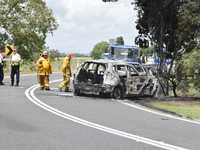 TWO people has survived a fiery head-on collision on the Pacific Highway near Grafton on Sunday morning.

At about 10am, police attempted to stop a Nissan X-Trail travelling southbound on the highway at Ulmarra.

After the Queensland driver in his 20s failed to stop, police initiated a pursuit after the vehicle.

That vehicle crossed over to the northbound lanes and hit a oncoming 4WD, being driven by a mid north coast man in his 60s.

The vehicles caught alight after impact, with plumes of black smoke visible to motorists in the area.

The drivers had to be extricated from the vehicles and rushed to Coffs Harbour Hospital, where the younger driver remains on police guard.

Police are still making enquiries into the incident and no charges have been laid.

The Pacific Highway is closed in both directions.

News An opportunistic Dalby thief’s sticky fingers were heard in court, after he blatantly stole a punter’s pokies winnings from their machine while he was on CCTV.

The new utes ‘too dangerous’ for Aussie roads

'These are the most toxic traits in marriages'

Drunk man falls off balcony trying to sneak into nightclub

Footy fans give it to Scott Morrison in at AFL game

News Embattled war hero Ben Roberts-Smith has fronted Qld staff following explosive audio recordings in which he said his colleagues had “f---ing ... worn me down”.

Crime A father breached a suspended prison sentence after he committed multiple crimes.

Heartbreaking decision made after twin’s stillbirth