RIP JOEL: Family heartbroken after loss of brother and son

RIP JOEL: Family heartbroken after loss of brother and son

by Carlie Walker and amy.formosa

Carlie Walker Journalist Coming from Newcastle in New South Wales, Carlie completed an arts degree before moving to the Fraser Coast. She has been with the Chronicle since 2007.
Full Profile

UPDATE: The family of Maryborough's Joel Winterton have shared heartbreaking tributes to the 25-year-old on Facebook after his body was found in the Mary River about 11.30pm on Thursday night.

His foster father Jamie Hoolahan said a memorial would be held for Joel at the Lamington Bridge at 9am on Sunday.

Joel was found by a family member who had spent each night scouring the river looking for him since he went missing after falling into the river about 9.20am on Wednesday.

"We were devastated but relieved he was found, and found by family," he wrote.

Jamie thanked all of Joel's friends, who came to the river to keep a vigil as the search continued.

"We must have done something right with our boy for him to be loved so much by so many."

"Didn't actually feel real until last night when they were pulling him out of the river," he wrote.

"Not a day will go by where we aren't thinking about you Joely, we love you so much."

EARLIER: Tributes have been flowing in on Facebook this morning after the news Joel Winterton's body has been found.

Linda Osborne: What sad news, I was hoping for a different ending, RIP Joel, you are going to be sadly missed by so many

Tahleha Baptie: Worse thing to wake up to! We all had hope, he'd pull through!

So many people will love and miss you, and we all have memories to share so your memory lives on with your beautiful son chase! RIP!

Debbie Rata: Rip I can't say how it feels to loose a child but my heart goes out to the family may they fined peace in side there souls that he has been found God bless u young man and your family and friends at this time.

Rhiannon Shae Houghton: So sorry for all you went through and all that you're going through now... I can only imagine the pain you all must be feeling, I send my condolences.

Jackie Sullivan: Rip to an amazing young man and a wonderful father of chase you will be missed by so many thinking of his family and friends threw this hard time my thoughts are with you always.

Joy Oliver: Absolutely devastating for everyone involved, love and hugs to all, rest peacefully now Joel

UPDATE 7AM: POLICE have confirmed the body of missing man Joel Winterton has been located on the banks of the Mary River near Wharf St at 11.25pm Thursday.

Hervey Bay Police Acting Sergeant Richard Whatman said a family member was in a boat and located the man's body.

Police attended the scene soon after and confirmed the deceased.

Sgt Whatman said a report would be prepared for the coroner.

The search for Joel started at 9.15am on Wednesday.

Joel was fishing from the pontoon next to the Lamington Bridge with a close friend when disaster struck.

When Joel fell into the water, his mate followed him in but wasn't able to pull him out of the water.

Crews battled a swift moving tide during the search.

ONE way or another, they will bring their brother home.

That was Jake Hoolahan's vow.

He is foster brother to Maryborough man Joel Winterton, who disappeared after falling into the Mary River after he had an epileptic seizure just after 9am on Wednesday.

UPDATE: Family vow to wait by Mary River until Joel is found

On Thursday there was no sign of Joel as emergency service crews continued to search the Mary River.

Jake said the family will stay by the side of the river until he is returned to them. 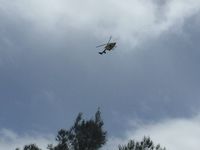 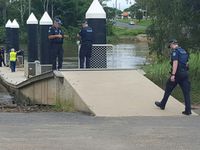 
At times 50 or more of Joel's closest friends and families gathered by the side of the river yesterday, hoping for a miracle.

"We will be here every day at the river until they find him," Jake said.

Even if their worst fears are true, Jake said all they want is to get Joel back.

"That would be better closure for us," Jake said.

Jake said Joel was fishing from the pontoon next to the Lamington Bridge with a close friend when disaster struck.

When Joel fell into the water, his mate followed him in.

The man grabbed Joel and attempted to pull him out of the water.

For a moment he had Joel. But he wasn't able to pull him out of the water.

Jake said the friend tried for 15 minutes to find Joel, cutting himself under the pontoon, but the strong current from the river kept pushing him under the wharf.

He surfaced empty-handed and soon emergency crews were on the scene to join the search.

Jake said Joel's mate was "distraught" about what had happened.

Since then water police, State Emergency Service workers and fire crews have been at the scene, searching a 2km stretch of the Mary River, trying to find Joel.

Jake said Joel would never have believed so many people would be there just for him.

"He always thought he didn't have many friends," Jake said.

"I think he thought that not many people cared about him, but in actual fact there are a lot of people who care about him."

Jake said his family took Joel, 25, in when he was a troubled teenager.

Jake's father was a police officer in Maryborough and saw Joel around occasionally.

He started staying at the family's home sporadically and then more regularly.

Jake said at first he felt he would never get along with Joel.

But as months turned into years, he came to consider Joel as a brother and a best mate.

"He was happy all the time," he said.

Jake said the family was focusing on providing support for Joel's son Chase, 2.

He said the most frustrating thing about the situation was that it "could have been prevented so easily".

Jake said with regular medication and better medical attention, the incident might not have happened.

He said he was determined to fundraise and spread epilepsy awareness in the aftermath of the tragic event.

On social media, Joel's friends and family shared messages of love and hope on his Facebook page, begging him to come home.

"Sending nothing but love and luck up to Joel's friends and family," Jesse Garden wrote.

"Life will never be the same without you," Melissa Houghton wrote.

The search for Joel will recommence on Friday at first light.

Crime Dalby police will allege a man was heavily intoxicated when he drove his car into a popular shop front along Drayton Street.

News A man ran the risk of being sent back to his home country after he launched an aggressive attack on two women at a pub in St George.

Crime Police have charged a man with multiple offences after he crashed his car near Chinchilla. FULL DETAILS:

Property A bidding war between two prospective buyers resulted in more than 300 hectares of prime agricultural land near Dalby selling for an eye watering amount.

Business Are you looking to get your foot in the door at a booming Dalby business? We can...

Confirmed: When COVID restrictions will ease

Health Coronavirus Qld: COVID restrictions will ease at 6am on Thursday