HOUSE FIRE: Mum and five kids left with nothing

HOUSE FIRE: Mum and five kids left with nothing

Anna Hartley Journalist I come from a small town called Peak Crossing and grew up in the country. I love the community atmosphere close-knit towns like Peak Crossing and Ipswich have. I firmly believe that everyone has a story to tell and my favourite part about journalism is meeting new and interesting people and sharing their stories. Send any news tips to anna.hartley@qt.com.au
Full Profile
0
1

AN IPSWICH mother and her five children have been left with nothing after a fire destroyed their home in Gailes overnight.

The woman spotted flames inside her home at about 6.22pm on Saturday night and tried to put them out with water, which is believed to have aggravated the fire.

The family escaped the blaze and could do nothing but watch as flames engulfed their home.

Neighbours called emergency services as thick black smoke blanketed Nagel St but the house could not be saved.

The Logan House Fire Support Network has stepped in to help the Ipswich mum and her five children, aged between five and 17.

Louie Naumovski of Logan House Fire Support Network said the home was government-owned and the family had no contents insurance.

"They pretty much lost everything. They just have the clothes on their backs," he said.

"It's the worst feeling in the world standing there and watching your home and all your property go up in flames.

"It was a roaring fire and was huge by the time officers arrived. There was no chance of saving that house."

Mr Naumovski said he would know more about what the family needed once they secured accommodation.

"This family have no friends close by and the main thing now is getting a roof over their heads. In the meanwhile we'll continue to help them out," he said.

"We'll know more from Monday but if people want to donate gift vouchers and food in the meantime we will certainly pass that on." 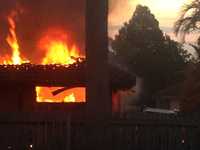 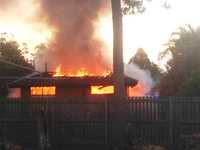 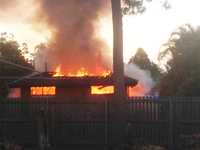 Mr Naumovski said although the situation had left the mother distraught, she acted quickly in a difficult situation.

"She did the best thing and got the kids and evacuated," he said.

A Queensland Fire and Emergency Services spokesperson said the fire was fully extinguished by 8.46pm on Saturday.

Police guarded the scene overnight before the QFES Fire Investigation Unit attended the property this morning.

Investigations into the cause of the fire are ongoing.

Weather Hundreds of Western Downs residents without power are set to sweat through the afternoon after severe storms smashed the region damaging powerlines and poles.

Breaking A young motorbike rider has lost his life after he was involved in a fatal crash in the northern region of the Western Downs.

News Brisbane has been named the preferred candidate by the IOC to host the 2032 Olympic Games, giving Queensland’s bid an important edge with organisers.

News A shocking new study shows Queenslanders nearly tripled their cocaine and ecstasy consumption over the past four years.

‘It’s a bad one’: Towns cut off as flood causes havoc

TRAIN CRASH: Up to 8000 litres of diesel spilled

GOING, SOLD! The Roma properties worth more than $1 million

News Looking for some premium property in the Maranoa? Here are some parcels of land going for millions.

Weather The Bureau of Meteorology has issued a warning for multiple towns across the...

CSG exploration project kicks off in Maranoa for first-time...

News New parts of the Maranoa are being explored for future gas projects. SEE WHERE: