Francis Witsenhuysen I became a journalist to share in the wealth of information life offers and to hopefully make some sort of positive impact to readers' lives. I am a lover of the written word, photography, especially when it makes you feel something - which is what i endeavour to do with my stories.
Full Profile
0

THE fire inspector who condemned Gatton's Imperial Hotel as a fire trap just four months ago should be hailed a hero today.

His report closing down the Imperial's backpacker accommodation meant that no-one was in the hotel when it became a blazing inferno yesterday morning.

His scathing report stated that if anyone was in the building when a fire broke out they would have little chance of escape.

The atmosphere at the scene yesterday was one of confusion and amazement as locals lined Railway St, taking photos and watching Fire and Rescue Crews douse the smouldering rubble.

Paula Luther of Gatton, who was on the scene just after the blaze started at about 1am, said she couldn't believe the destruction.

"My husband and son are in the Gatton Fire Service Auxiliary and I know there were issues with the station's alarm sirens going off," she said.

"But they got there really quickly regardless and I was there to watch them trying to put the fire out.

"The heat from the flames was so intense the fire truck started to melt. It's devastating."

Paula said she had heard a group of foreigners staying above the old Wyman building were evacuated shortly after emergency services arrived at the scene.

"They couldn't even get their clothes and someone left a passport in one of the rooms," she said.

Local business owner Mal McDonnell from Malamanda Fashions, a business directly opposite where the historic 147-year-old Imperial Hotel once stood, said his business sustained cracked glass on its front doors from the heat of the inferno, but neighbouring business, the Gatton florist, was untouched.

The adjacent buildings of the Imperial Hotel were left scorched and burned on the connecting walls.

Super Cheap Auto was hit the worst, with extensive damage to the foundations of the building.

Krystal Raddatz was the first to notice the fire, after finishing a night-filling shift at work.

"We could see a lot of smoke billowing directly from the main street…we couldn't hear any sirens so we decided to walk down to investigate," she said.

"I was concerned it was going to explode into Super Cheap, but the firies did a great job."

Sergeant Tony Harm of Gatton Police said investigations were ongoing and would take some time.

"Local detectives are on the job, doing background work and investigations and Toowoomba scenes of crime are here," he said.

"We are waiting on an excavator and machinery to start the next task of sifting through some of the debris.

"We can't give much information about whether it was suspicious or otherwise." 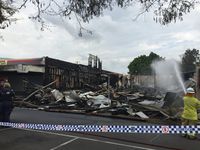 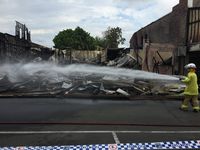 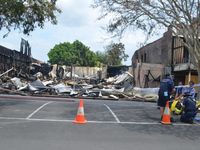 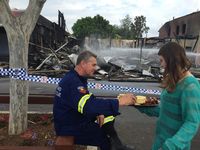 News As you have hopefully seen by now, we are moving across to a new home under the umbrella of The Courier-Mail. This will a far better news app experience.

Prime mover smashes into car along Warrego Highway in Dalby

News Three people received the fright of their lives after their car crashed into a prime mover along the Warrego Highway in Dalby. SEE THE PHOTOS:

Trendy diets and veganism could lead to birth defects

Fisherman dies after being washed off rocks

One in six DVOs breached, but cops say no quick fix

News Outdoor dining opportunities and an overall village feel will be part of a multi-million dollar plan to transform the Miles CBD. SEE THE PLANS INSIDE:

Crime It’s alleged the Dalby woman nearly had a head on crash while attempting to run...

IT’S ON: Dalby Show returns with a bang after pandemic

Community Lawnmower races, rodeos, and an Australian record attempt are only the tip of the...