by Tara Miko
Tara Miko Journalist Tara joined the company in 2010 after graduating with a journalism and politics degree from Griffith University in Brisbane. After first working in newspapers in the Bowen Basin in Central Queensland, she joined the team at The Chronicle in 2013. In September that year she took over the reins of the Rural Weekly, and has been on the crime desk in Toowoomba since 2015.
Full Profile
0

UPDATE: The driver of a truck which rolled west of Toowoomba has been airlifted to hospital.

RACQ CareFlilght was called to the crash scene on Cecil Plains Moonie Rd, about 4.5km west of Cecil Plains, to airlift the 56-year-old male driver who received facial injuries in the incident.

Heavy machinery sourced from nearby Queensland Cotton has been called in to help clear the crash scene. 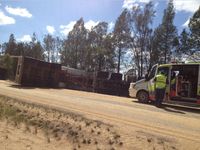 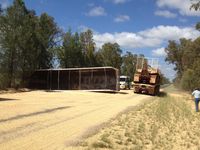 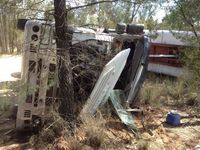 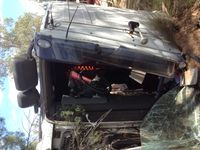 8AM: A semi-trailer has rolled west of Toowoomba with police establishing traffic diversions around the area.

Queensland Fire and Emergency Services reported a truck was on its side off the Cecil Plains Moonie Rd, about 4.5km west of Cecil Plains.

The incident occurred about 7.40am, and emergency services are on scene.

Paramedics are treating the driver, a male aged in his 50s, for facial injuries.

He was free of the vehicle as emergency services arrived at the scene.

News ORIGIN Energy has confirmed there will be job losses in the Western Downs. DETAILS:

‘Angry’ man hoped Dalby police got stuck by needles in his...

Crime A FATHER who had a meltdown during a search of his home threatened to assault police and hoped they got ‘stuck’ from the needles he said he had in his pocket.

News A COMBINED 125 years of service has been celebrated a Western Downs supermarket, bucking the trend of unemployment in Queensland.

STATE ELECTION: Where to vote in Warrego Electorate

News HERE are all the locations you can cast your vote before and on election day. DETAILS:

How our experts rated debate performance

Premier coy on whether Maguire had key to her home

Community ZOMBIES, ghosts, and ghouls will be rampaging through the streets of Dalby, armed with sanitiser and face masks for Halloween. SEE HOW YOU CAN JOIN THE FUN:

Man in court for breaking his way across the NSW border

News A MAN has appeared in front of St George Magistrates Court after trying to cross...

Crime DEATHS, stolen vehicles and impaired drivers have been frequent in a country town...