Memorial service for Greg Sutherland to be held on Saturday

Memorial service for Greg Sutherland to be held on Saturday

A MEMORIAL service for Greg Sutherland will be held at the Mackay Entertainment and Convention Centre on Saturday at 10am.

Community leaders have paid tribute to the late Mr Sutherland:

Greg Sutherland was one of those rare people who really does make things happen.

He didn't do it for himself, he did it mostly for this Mackay regional community. In fact, I cannot think of anybody who worked harder to improve the lives of countless people in this community.

There are many monuments to his efforts visible throughout our region that are physical and prominent as testament to his commitment.

I have not known Greg for all of his life as some have but I remember when he first become apparent on my personal radar - I was getting reports of Greg Sutherland doing this and proposing that and having a vision for innovative regional development so much so that in sought him out - I just had to meet this guy!

His passion for Mackay and his deep-seated passion for the local Indigenous Community was obvious and many people have Greg to thank for their improved life.

He was one of the most innovative entrepreneurs I have ever met, his ability to think laterally about things combined with his vision will leave a giant hole in our community and our lives.

Most of all he will be remembered as a loyal friend.

Mackay Regional Council mayor Deirdre Comerford said the thoughts and prayers of council and the community were with the Sutherland family following the sudden loss of Greg Sutherland.

She said he was a tireless worker for the community and the sadness surrounding his death would be felt far and wide.

"Greg was Mr Rugby League to many due to the enormous amount of work he did for the sport in Mackay and Queensland," Cr Comerford said.

"But his community involvement extended far beyond rugby league, with Greg also heavily involved in Rotary and a key advocate for the indigenous, Torres Strait Islander and South Sea Islander communities,'' she said.

Greg Sutherland was Mackay Regional Council's 2012 Citizen of the Year.

At the time this award was bestowed upon him, his hard work and dedication in campaigning for a new stadium for the city for more than a decade had paid off. 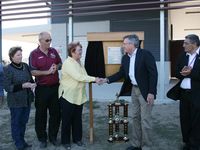 Col Meng remembers Greg Sutherland as the sort of bloke who did "nothing but think of ways to help the community".

"He was probably over-generous," he said.

"If he could do a favour for anyone he'd do it."

He said when Greg's kids were little, he would get them to save part of their pocket money each week, to go and buy things to help the needy.

He was also a respected member of the indigenous and islander community, and Mr Meng said he would go to the islands a few times a year and take containers of goods.

"We would have dinner together every fortnight," he said.

"I just thought he was a good mate, certainly not anyone has all good about him but he didn't have many bads."

"Greg was an outstanding Queenslander and a true son of Mackay who was very proud of his Australian South Sea Islander and Scottish heritage.

He made an enormous contribution to the sport of rugby league," Former Mackay MP Tim Mulherin said.

"In his role as CEO of Skills Training Mackay, he advocated for socially disadvantaged unemployed people.

"He is also known for contributions to economic development and charitable work here in Mackay and also in the South Sea Islands. He will be sadly missed.

"My thoughts and prayers go out to his wife, children and extended family."

Crime Dalby police received reports about a disturbance where a man was allegedly armed with a knife. MORE DETAILS:

Crime A Dalby man rained down blows upon a security guard after he was refused entry to a licensed premises twice in one night.

‘It’s like a smorgasbord’: Alarm sounded on Cape croc danger

Opinion Annastacia Palaszczuk may be entitled to her own opinions but not her own facts when it comes to JobSeeker and economic support, writes Josh Frydenberg.

How Queenslanders left their Govt for dead in COVID recovery

Weather Showers and hot weather will hit the Western Downs this week in the wake of a...