Family lose daughter one year, one month, one day after mum

Family lose daughter one year, one month, one day after mum 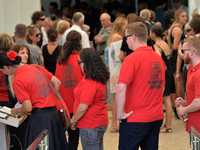 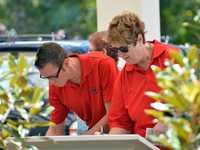 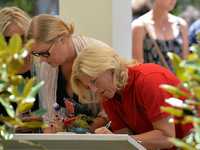 SHE was a "free spirit", an animal lover, an artist and someone whose answer to the meaning of life was "just be".

Hundreds of mourners today shared their grief over the death of 19-year-old Noosaville resident Ella Hendrie, who was killed in a head-on collision at Doonan on February 15.

The Tewantin funeral parlour was packed to its limit, chairs spilling into the courtyard as Ella's friends Evie Bryce and Jared Wytenburg gave their tribute while her father, boyfriend of four years and three siblings looked on.

"In what can sometimes be a dark world, Ella truly was a ray of sunshine," Evie said.

As a child she was shy, "sometimes the most anyone saw of her was a big mop of blonde curls", Jared said.

"Despite her shyness…Ella always met everyone with a bright beaming smile."

She grew up on a farm and her love of animals "both furry and slimey" led to volunteering at Tewantin Vet Surgey, which she loved.

"We all strive to find meaning in our lives - to grasp a whisp of what it meant to truly live," Jared said.

"At school amongst a flurry of stress and drama, we were always astonished at how Ella lived her life utterly carefree.

"The world threw everything at her, but she remained strong, with a bounce in her step every day and beaming like the sun.

EARLIER: One year, one month and one day.

It was too soon after the death of his wife to learn he'd lost a daughter. Her funeral is today.

Alan 'Wal' Hendrie's 19-year-old daughter Ella was killed in a head-on car crash with a truck 10 days ago on February 15.

It was just over a year since his wife Joanne died from cancer.

Speaking with the Daily ahead of Ella's funeral in Tewantin today, Mr Hendrie said he and Ella's three siblings were reeling from their loss.

"She just loved life you know...she just did her own thing," he said.

"I don't think she had an enemy - everyone just loved her."

Ella had been playing table tennis with her grandmother and was on her way to work at Bunnings Noosa when her car and a truck collided in an horrific crash on Walter Hay Dr, Doonan.

Ella had been quiet in nature until the family moved from Victoria four years ago, Mr Hendrie said.

"She used to hide behind her father until we got up here, then she just blossomed," he said.

"She opened herself to the world."

"She went skydiving with me in September. She wanted a kombi to go travelling. She was a real hipster."

"We've had a pretty crap run mate," he said.

"But we gotta be a bit strong and do what we can.

"It should be a tough old day today but we'll get through it and do what we gotta do."

Crime With new youth bail laws set to pass parliament this week, the shock stats behind the Palaszczuk Government's ‘blitz on bail’ program have been revealed.

Health The Palaszczuk Government is under pressure to find a local solution to a worldwide shortage of a crucial piece of medical equipment.

This is why you don’t need an SUV

News The opening of the travel bubble means Queenslanders are able to travel freely overseas – and it’s a truly special moment for Kiwis stuck here.

‘You are at risk’: PM’s vaccine plea

Community A born-and-bred Bell girl completing a double degree has wowed the judges at the...

Crime A search of a rural Western Downs home resulted in a young Kogan man being charged...