Plea for help to clothe mother and daughter following fire

Plea for help to clothe mother and daughter following fire

A DALBY woman, who lost her worldly possessions and the ashes of her late son in a freak house fire, is pleading for the community's help to clothe her and her 19-month-old daughter.

Rebecca Smith and her daughter Pippa were asleep for the first night in their new Mitchell home last Wednesday when a fire ignited near the chimney at about 1am.

Both escaped unharmed but the blaze quickly spread, engulfing the home and destroying everything Rebecca had owned.

Rebecca's mother Annette told The Western Star the family was desperate for donations and help rebuild the young family's life.

"Bec and Pippa have been left with nothing, all she had left was packed up in the back of her little hatchback," Annette said.

"They have moved back to Millmerran to live with my sister while I look for a house big enough for all of us.

"I am asking our communities for help - Bec does not deserve what has happened."

Annette said the family would appreciate clothing donations for both mother and daughter, with all other donations welcomed.

Cash donations can be made to:

Firefighters, police and paramedics were called to the scene at 1.20am, with crews arriving within 10 minutes, according to Mitchell Police officer-in- charge Adam Robertson.

"We were out of bed and at the scene in eight minutes," he said.

"There were a couple of fire crews from Mitchell and one from Roma came out.

All occupants were transported to Mitchell hospital with some smoke inhalation, but were released a short time later.

Sgt Robertson said it was unfortunately a timely reminder to ensure houses were equipped with working smoke alarms and that areas near flues were kept clean.

"What appears to have happened here is that bird and possum nests have not been cleaned away from the flue," he said.

"The flue has taken the heat and smoke from the wood fire out through the wood cavity and, over time, birds and possums have built nests near this opening because it has been warm.

"Please, clean your roof cavity away from the flue, keep it clear, and make sure you have adequate numbers of working fire alarms." 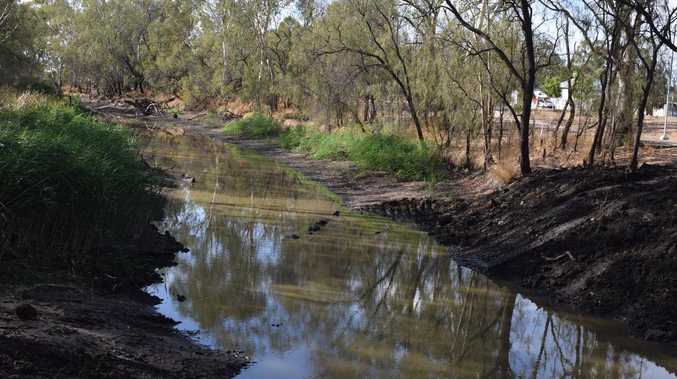