ONE of the best known houses in Maryborough has been sold after hitting the market late last month.

Josh and Brandon Jarius' "lad pad" was listed for sale in July for offers over $350,000 as the brothers move on to their next stage in life.

The pair rose to TV fame in 2018 on House Rules, when the Neptune St home was renovated on the reality show.

Josh told the Chronicle he was "pretty sad to see her go" but he couldn't live with his brother forever.

"We have both bought blocks in west Maryborough so we are going to build our own houses out there," he said.

Josh said the thing he would miss most about the house was the memories.

"Brandon and I had been working to renovate the house even before the show and we had mates come around and help so there was a lot of time spent together and good memories there," he said. 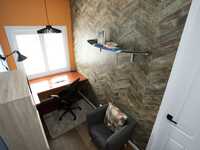 Josh said he hoped the new owners would love the house as much as they had.

"We have had some bloody good parties here," he said.

"The house was built for entertaining so I hope they enjoy that."

The reality star said he would take some ideas from his time building and designing on the TV show to his new house.

"The plan is to not make a Plain Jane, run of the mill place," he said.

Selling agent from One Realty Maryborough, Greg Caulley said there was a lot of interest in the famous home.

Mr Caulley said a key strength of the house was, due to the extent of the renovations, it was essentially a brand new home.

Josh and Brandon will be taking furniture from the home renovations show with them.

Crime Police were called after a 71-year-old allegedly assaulted a man 40 years his junior.

Crime After his arrest for public nuisance, the 25-year-old refused to change into the watch house pants as required by police.

Crime An elderly Western Downs man brought in the New Years with an arrest, after he was caught drink driving more than three times the legal limit.

How squatters exploited loophole for free slice of paradise

Offbeat Despite its cancellation in 2020, the Miles Back to the Bush Festival has been able...

90,000L of water saved through council upgrades at Bell Park

Council News A water smart upgrade delivered by council is expected to save up to 90,000L of...