RUGBY UNION: Harry Hoopert used to be just one of the kids ‘running a muck’ at the Wheatmen club while his brother played in A Grade, but now the former Wheatmen returns a Queensland Reds player with hopes of inspiring the next generation of young athlete just like him.

Hoopert headed home to his roots this week joined by his teammate Hamish Stewart as part of the Queensland-wide Reds to Regions program.

Reds players will visit 21 regions around Queensland this week as a way of giving back to their supporters and promoting rugby union in regional centres.

“Basically what we’re trying to do is give a bit of relief to the children who are going through the drought and take a bit of pressure off them and expose rugby union,” Stewart said.

“We’re trying to implement rugby union around the smaller towns and trying to make a big thing out of it.”

The opportunity was a dream come true for excited junior Wheatmen who had the chance to hit the field with their footy idols. 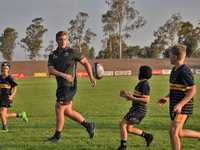 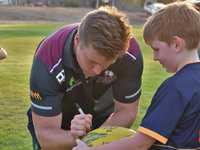 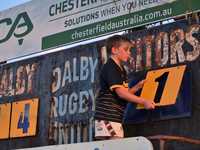 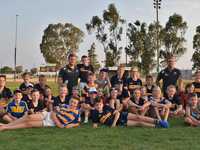 “They’re all pretty happy, they’ve got a bit of fire about them,” Hoopert said.

“They were certainly happy for us to come out and throw the footy around so it’s good to see them with happy faces.”

Returning to Dalby soil, Hoopert reminisced about his days in under-6s, pulling on the blue and gold.

“I think I played in about three or four grand finals and we only won one so that was a bit of a highlight,” he said.

“It’s very exciting to come back, the club has evolved a lot over the last couple of years which is good to see.

“Every time I come back it’s always a good welcoming, everyone’s always pretty happy to see me.”

In January the Reds will return to Dalby for a highly anticipated pre-season match against the Waratahs.

Crime Investigations are continuing into an alleged street brawl between two men that occurred outside a Western Downs pub. MORE DETAILS:

Crime An elderly Western Downs man brought in the New Years with an arrest, after he was caught drink driving more than three times the legal limit.

When to expect COVID jab in Australia

‘Healthy’ snack you should never eat

Offbeat Despite its cancellation in 2020, the Miles Back to the Bush Festival has been able to attract international interest through the growing trend of lockdown beards.

90,000L of water saved through council upgrades at Bell Park

Council News A water smart upgrade delivered by council is expected to save up to 90,000L of...

News The Western Downs will share in a $2 billion cash splash across Australia to...