Saints too good for inexperienced Swans as season kicks off

Saints too good for inexperienced Swans as season kicks off

ROUND one of the Allied Pickfords Cup got underway on Saturday with the South Burnett Saints defeating the Dalby Swans 11.16-82 to 7.6-48 in Kingaroy.

After a season off, the Swans ran out for their first game in over a year with a new look side featuring several debutants, including a number of league and rugby converts.

The first quarter was tightly contested with neither teams finding any room to move around the contest.

The Swan's Joseph McVeigh was the first to hit the scoreboard for the match when he was rewarded for a tackle inside the Saints 50.

The Saints had numerous opportunities to kick goals in the first quarter, however only managed one goal through Mitch Francis.

The second quarter started off much the same with both sides struggling to get clean possession of the ball.

The Saints had numerous inside 50s, however Steven Tapp was too strong down back for the Swans, taking several intercept marks. 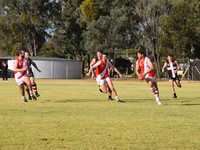 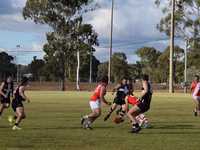 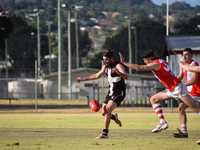 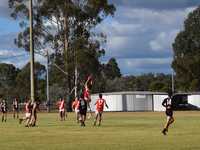 Just like the first quarter the Swans were first to find a goal through a right foot snap from Jake Schreiber.

The Saints answered back with another goal from Mitch Francis off the back of a down field free kick.

Another free kick went the way of the Saints who hit Will Packer on a lead in the forward 50.

Packer gave the handball to his brother James who slotted a goal on his left foot.

Shortly after the Saints moved the ball well through the middle and found Francis leading hard from the square.

Francis took the mark and kicked his third for the match.

Nathan Trace kicked another for the Saints before Dylan Taylor took a mark 20 metres out, kicking the Swans third goal.

The Saints wasted no time in the third term with Francis kicking his third in the opening minutes.

The Swans answered back after Lythanial King-Togia kicked a goal from a tight angle in the pocket.

Nathan Trace and Robert Goodwin kicked goals for the Saints in the third quarter, while Joseph Stephen kicked one for the Swans.

The Saints had a 27 point lead heading into the fourth quarter, however the Swans came out fighting, kicking two early goals to close the gap to 15 points.

Two transported to Dalby hospital after crashing into tree

News UPDATE: Man and woman transported to Dalby Hospital after crashing into tree southwest of Dalby.

How you can nominate local legends for Australia Day Awards

Council News NOMINATIONS for the region’s most significant awards are now open. Here’s how to nominate someone you know.

BREAKING: Power Lines down and sparking in Wandoan

News WARNING: Residents are being asked to avoid the area as live powerlines are down across the road.

News CONCERN is mounting over the agriculture industry as border closures shut-out ‘essential workers’ while farmers are already doing is tough battling through years of...

Police officer to face Gatton court for stalking and assault

News WARATAH great Mack Mason will make his return to southwest Queensland as he kicks off with the local boys in an effort to climb the ladder from last place.

Western Downs set for a wet night as thunderstorm rolls in

News WARNING: A thunderstorm inching closer to Chinchilla and Dalby has the potential to...