For many Australians, breast cancer is a nasty reality affecting their daily lives, whether they have been diagnosed themselves, or whether someone they love is under attack from the big 'C'.

Breast cancer is estimated to make up roughly 13% of all cancers diagnosed in Australia in 2018. Although the chances of surviving at least 5 years with this diagnosis are relatively high (90%), this is nonetheless devastating news for all who hear it.

As October is breast cancer awareness month, a much loved Toowoomba lady has teamed up with the multi-talented actor, Golden Logie winner, all-round nice guy and cancer advocate, Samuel Johnson, to raise money for cancer research.

Local lady, Paula Lucas, decided to organise the Breast Night Ever Mexican Fiesta event, in support of the Love Your Sister Foundation.

Paula, her sister, and her sister-in-law, were all diagnosed with breast cancer in their early 40's. As Paula put it, the three of them all became members of 'the Breast Cancer Club', a club nobody joins voluntarily. In the prime of their lives, the three sisters are all at various stages of their respective journeys and treatments.

As part of her own journey, Paula followed the Love Your Sister Foundation on Facebook and connected with the story of Connie Johnson and the brother she left behind, Samuel.

With Connie's terminal diagnosis, came the dare that would see Samuel travel around Australia on a unicycle, reminding women to have their breasts checked. Through the Love Your Sister Foundation, Samuel aimed to raise $1 million for the Garvan Institute of Medical Research, to find a cure for breast cancer. He ended up raising more than $1.4 million and was awarded the Medal of the Order of Australia for service to cancer research support organisations.

Thanks to the ongoing efforts of the Love Your Sister foundation, a new breast cancer lab (the Connie Johnson Lab) was established at the Garvan Institute. To Samuel, the best part about the Love Your Sister Foundation is the people involved. "They're the reason why I bother. Fundraising ain't an easy caper and, if I didn't value the people I'm trying to help protect, I wouldn't last. 'Fundsies' (fundraisers) and school visits are the best part of my job, for sure," he said.

Although the Love Your Sister Foundation stated as a breast cancer advocacy group, it has now developed into a village that fights all cancers. Samuel currently has a very ambitious $10 million fund-raising goal. "I didn't just make that promise to my dying sister, I promised our 560,000-strong village. It's much easier to ignore a personal goal so, to combat that, I tell everyone I can, as insurance. The potential egg on my face then becomes a real motivator," explained Samuel who has managed, so far, to raise just under $8 million. "I've thankfully reached every fund-raising goal I've set in life, but a million dollars is tough to make and I don't treat the rest as a given in any way."

Samuel's way forward is clear as glass. "My sister's words echo in my head daily: It's not over when you get off the unicycle. It's not over when I die. It's over when parents stop losing their kids. I stand as chief custodian of my sister's legacy, which means I am in charge of her mission. I'll never walk away from that," he said.

It comes as no surprise that Paula would choose to help Samuel hit that target. She reached out to Samuel, a chat which became the pebble that would trigger a local avalanche in charity and good will.

Paula said she's hoping to raise at least $70,000 through the Breast Night Ever event in support of Love Your Sister, which will be donated to the Garvan Institute and will be directed towards the Connie Johnson Breast Cancer Lab for a new metastatic tissue bank, to help solve all cancers. Every cent raised, will be spent on research. "No admin, no skimming, no bulls***," declared Samuel, who plans on making the Breast Night Ever Event as exciting and fun as he possibly can. "Kicking cancer in the face-hole doesn't have to be boring or depressing," he explained.

Paula has enlisted the help of a string of sponsors to make a dent in her fund-raising goal for the evening, and will have numerous prizes up for grabs. The talented Toowoomba local, Kendall Perkins, will help raise much needed fundsby doing a painting especially for the event, which will be auctioned off on the night.

Dalby twins, Luke and Cody Cook (known for appearing on House Rules), have put up an evening on their back porch in their bid to raise funds for this honourable cause. This prize will also be auctioned and the winner, along with three friends, will join the Cook twins for a BBQ and drinks on their competition-winning deck. Last (but not least) to be auctioned, will be a signed rugby league jersey from Queensland legend, Wally Lewis.

Paula hopes to secure not only the attendance of women at the event, but men as well. This evening is for everyone - whether you've been diagnosed, or you're supporting a loved one with their diagnosis. 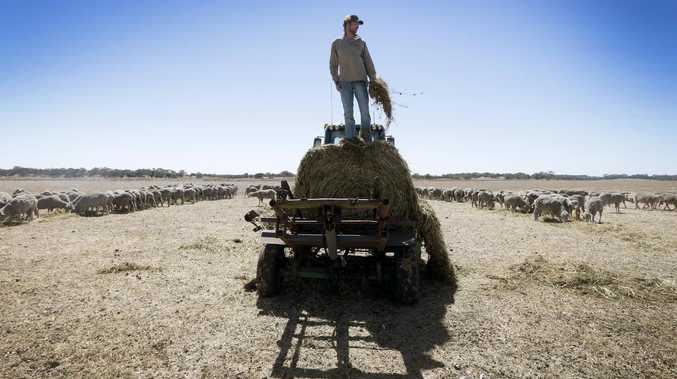 Debris found in water as search continues for missing plane

‘I’m going to steal you’: Terrifying threat to girl, 7

News Lauga: What's the hold up to this 1500 job project? A decision by the Commonwealth Minister was due on June 24, 2019

Music Katelann Grealy has just returned from the Academy of Country Music and says she’s...

News An 'electrical smell' was detected in the plane, a Qantas spokesman said.