Rugby 9s : Kicking goals in competitive games of rugby, as well as mixing off the field, were two elements that came together on the weekend.

In its sixth consecutive year, the Kirstin Albeck Memorial 9s day paid tribute to the local woman who lost her battle with Ewing Sarcoma by raising money for other battlers in the community.

This year, the event raised money for Bailey Hockey, a 12-year-old Roma girl who in January 2020 was diagnosed with an extremely rare cancer.

Mitchell Magpies juniors LifeFlight also received some of the funds.

With a total of 14 teams vying for the shield, Mitchell Magpies were hungry for a win after narrowly defeating Toowoomba with a game-winning try by Griffin Newton after the team went into golden try overtime.

However, St George’s undefeated streak continued in the grand final, taking out the win 22-11.

St George player Corvin Cooper said with the scores even at 11-all with three minutes to go, they knew they had to dig deep and empty their tanks to emerge victorious.

“Maggies were hard opponents because they backed up and performed after a tough game against Toowoomba,” Cooper said.

“We played well as a team and all come together to get to the grand final, and everyone did their jobs well.”

Cooper said St George always tries to bring out a couple of teams for the day, to support some fantastic causes and prepare for the upcoming season.

“St George have a lot of good players and it’s hard to put us all in one team so we try take a couple of teams,” she said.

“We only got together the day before the carnival for a training run. The win gave us a confidence boost for the season ahead, as we all play together week in week out.”

Organiser Trent Knight said a lot of competitive rugby games made for some thrilling entertainment.

“The semi-final between Toowoomba and Mitchell was right down to the wire. With the game was nil-all at full-time and the two teams playing for the golden try, it made for some really exciting rugby,” he said.

Knight said the day wouldn’t be possible with the support of sponsors, volunteers and Kirstin’s family who are always a massive help in running the day.

“The girls and junior teams really spread the day out and gave the boys a bit of a rest. The girls games were good entertainment for the crowd, they played some absolute blinders and loved having the chance to play,” he said.

“We also had adult and kid foot races, and raffles so the whole day panned out really well.” 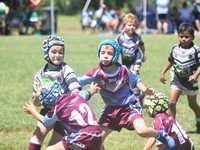 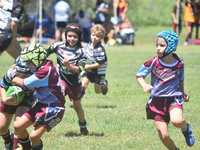 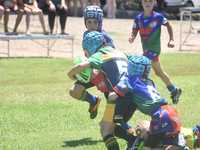 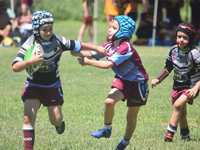