A MAN has been taken into police custody following a stand-off on the roof of the Clem 7 tunnel at Kangaroo Point.

It's understood the Special Emergency Response Team were sent in and the man was roped to the cherry picker of a Queensland Fire and Emergency vehicle. 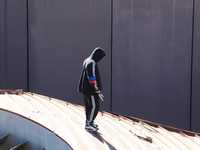 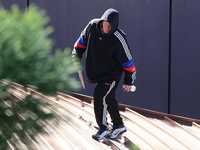 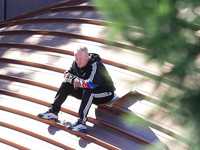 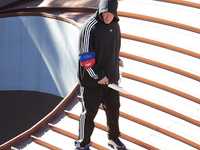 The man was armed with two knives during the siege, which began about 7am, forcing the closure of Shaftston Avenue and causing major traffic disruptions.

Kangaroo Point resident Aaron Walker said the man took the knives from the kitchen of a nearby coffee shop around 6.30 this morning - and attacked him and the cafe staff.

"I went to the coffee shop - I go there every day, and I saw the girls inside crying and on the phone," Mr Walker said.

"One of the girls was trying to get me inside and half explaining that there was a guy who's just taken two knives.

"And just as she said 'knives' I saw him running around the corner with these two big knives pointing towards us.

"I took two steps back and fell over the table. He then barged into the cafe and cornered one girl around the counter.

"Then the guy came running out of the cafe, through the park and obviously out here."

"This guy was wearing a black hoodie and his sleeves were really long and so you couldn't see his hands, only 30cm blades," Mr Walker said. "He was definitely high, definitely completely out of it.

"He had a plastic bag with a form in it, it looked like some kind of release paper from a rehab.

"I'm feeling pretty shaken. If he'd wanted to he was only a metre away - he could have put a knife in my chest."

The man is still speaking with police negotiators but has also been heard yelling "F*** off" to them.

The man yelled "f*** off, just f*** off," to two female police negotiators before taking his knives out of his pockets and taking a few steps towards them.

Local resident Tina Alshaikhli said she saw police had blocked the roads when she woke up around 7.30 this morning.

"Then I saw him on the roof. He wasn't yelling or anything just walking around," she said.

"I thought it was very strange."

All lanes of Shafston Avenue were blocked on either side of the tunnel.

Crime A man was intercepted by police after his boozy drive to Dalby, where he was seen swerving all over the Warrego Highway with a Captain Morgan can in his centre...

Music One of the Western Downs’ highly anticipated heritage events will return for a weekend of intimate opera, delightful chamber music performances, and infinite food and...

Community Dalby police and Stellarossa have collaborated to stem the tragic rise in road fatalities in the area, with more than 70 lives lost on Queensland roads already this...

Crime A father breached a suspended prison sentence after he committed multiple crimes. Here’s what he did:

The only state where public drunkenness still a crime

How the right apps can save thousands of dollars a year

'Queen cuts Meghan and Archie out of picture'

Crime A trip to Dalby for a young Brisbane man resulted punches being allegedly thrown at a security guard.

Crime He faced 22 counts of supplying a dangerous drug

EXPLAINED: Everything you can do now restrictions have eased

Health Everything you can do now COVID-19 restrictions have eased

Statewide audit after fears nurses let down by masks