TWISTED, blackened metal and machinery is all that's left of Brian Clacher and Rhonda Thompson's sheds, but they consider themselves lucky to still have their home.

The house on their Habana property sits just three metres from the burnt-out sheds that caught fire on Tuesday afternoon.

"I was standing in the kitchen defrosting lamb chops. I saw a big ball sort of thing," Rhonda said.

"Sometimes the sun catches something in the shed. For that split second I thought... the sun. And then I thought 'No, it's not' and I just ran out the door and screamed to Brian. He just ran and said 'call the brigade'."

Hearing explosions, the couple ran to tell neighbours and get hoses. 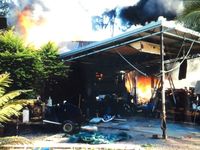 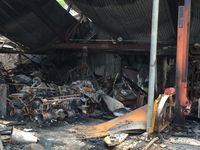 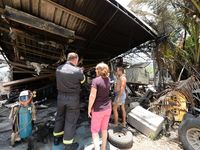 "A bloke I'd never met before came with a tractor of water," Brian said.

As the fire spread Rhonda quickly grabbed keys, a wallet, insurance papers and a basket of clothes, and threw them on the lawn.

"It was so close. There were explosions, there was fire. I got to the stage where I thought 'I don't know where this brigade is, we are gonna lose this house'," she said.

Brian's shed for was full of tools, lathes and a rare Ford Capri he hoped to rebuild in his retirement.

"It was a nightmare; an absolute nightmare. So much could have been so much worse though. I felt bad one of the firies was hurt," she said.

Crime An allegedly SPER suspended driver took his chances on the road on a disqualified licence, but was swiftly apprehended by police.

News Keen racegoers were dressed to impress at the Dalby Newmarket Races, letting their hair down for a great autumn day at the track. SEE ALL THE PHOTOS HERE:

Health Men are twice as likely as women to have a heart attack but new research may lead to gender-based therapies.

Where $200 tourism vouchers could go next

Travel The Palaszczuk government has left the door open to expanding its $200 voucher scheme to other parts of the state.

How COVID has changed average wages

‘My first and last love’: Wife’s tribute for crash victim

Woman hid in bathroom while gunman was on the loose

Crime Dalby police observed the 31-year-old gunning it along Hospital Rd, being clocked at 123km/h in an 80km/h zone.

Community Regional communities in the Western and Darling Downs will have the opportunity to...

Business A Queensland company is offering a new way for workers to chill out across the...